Written by Novril, Proofed by Specs

*Easy to play and easy combos that do high damage.

*Solid, even if linear, pressure.

*Nothing of value to do with meter to buff offense or neutral. (So you can just save it for alpha counters and healing, and EX DP)

*No reversals without meter

*Throw/hit is the only mixup.

Let’s get the 2 easy combos you need to know out of the way:

(2B should be omitted from the combo if it gets too long, like for example from a jump-in starter, or 3 x 2As. After 5B go straight for 5C.)

A harder variation that adds some extra damage:

(With an arcade stick, the input I find more comfortable to do the jump cancel instant airdash is 76A+B.)

Outspace the opponent with long ranged moves and prevent jumpins with anti-airs.

*j.A- 5 frame startup, must be blocked standing (unlike many j.As), can cross up

*A blocked air to ground j.B or j.C is a common way to start offense. After a blocked j.C you have enough time to dash in and 2A.

*It’s really easy to dash in and 2A to continue a combo if the jump-ins net a counter hit.

On the ground has a lot of anti-airs that scare the opponent from approaching:

*F-Tohno’s backdash is really fast. Use it to retreat from bad situations, or to space yourself for an anti-air angle.

*6B is a really good anti-air. It moves forward a bit and won’t cover opponent right above you very well, so keep the correct spacing with a backdash.

*5A very fast to whiff, can be used to beat low air dashes or to pick off opponents from the air.

*2B can be used as anti-air against certain jump-ins. 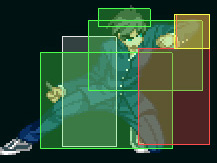 *All of these can follow with 5C -> air combo when they hit. 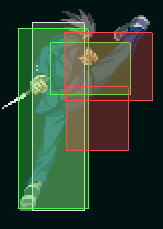 *236A a general poking tool that covers a lot of the screen. Reaches far horizontally and also zones the skies. The A version is fast to recover and pretty safe to whiff. The forward momentum of the move makes up for its slow walk speed and forward dash.

*2C is a far reaching low that’s very quick (6f) for its range. 2C 236A is a good safe 2in1 that can also catch back dashes because of its range.

*2[C] (charged version) charges pretty fast and reaches even farther. Can be jump canceled on block.

*Superjump forward is F-Tohno’s only air movement option that gains distance like a normal Melty Blood character. This is really helpful against zoners who don’t let F-Tohno get in. Upon landing on the opponent, use either a good jump-in depending on the angle, or shield into delayed 236D. This will either grant you a punish, or frame advantage if the 236D is blocked.

*214A/B is a way to advance on the ground while attacking and maintaining low profile. Grants a combo, but punishable on block. Unlike other Shiki slides, the block disadvantage doesn’t depend on distance. A slide is always -7, and B slide is always -4. Canceling into 236C on block leaves a gap for the opponent to shield through. So use sparingly in certain matchups where approaching in low profile is worth the risk, and preferably in a spacing where the opponent’s 4f moves won’t be able to reach after a blocked B slide.

Once you manage to get to point blank range you can start pressuring with elbows.

*2A- The first elbow. Hits low. 4 frame startup +3 on block, good for rushing down with rapid fire, has more range than 5A, and is your main pressure tool. On hit you can confirm into a combo like 2A2A 5B 2B 5C etc. etc. 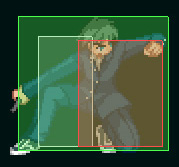 (2B should be omitted in combo with more fluff than the above or else the rest of the combo after 623B won’t work. For example after 3 2As or after a jump-in. Just for straight for the 5B 5C.)

*5A- The second elbow. Whiffs on crouchers but fast enough to frame trap. This means that 2A5A will catch jumpers while still maintaining momentum against crouch blocking.

*6B is very good to catch jumpers.

*Each hit in the chain can be delayed to create a fake gap. Especially good after 2A and 2B since they provide +frames on block.

*Mixing 2[C] in unpredictable places within the chain will allow for a jump canceled instant air dash to reset the pressure.

*Instead of dash 2A you can get some damage with dash throw. Throw is the main mixup tool since F-Tohno has no fast overheads he can enforce. Luckily, as always with Shiki, the throw is damaging and causes hard knockdown so it’s passable as the sole mixup.

*Use the throw option select. Done by holding forward and pressing A->E at a specific fast timing. If the opponent crouched the elbow it will be whiff canceled into a throw. If the opponent stands or tried to jump away, the game sees this as 5A5A which you can easily confirm and convert from.

*Using 236A at any point will allow you to disengage safely, if that’s what you prefer.

*After a blockstring in the corner ending with 2C you can cancel into 22A to catch retaliation. Leads to 5B 5C air combo if it hits, and safe when blocked because of how it’s spaced, utilizing the pushback from the blocked 2C. You can try to extend further by mixing slightly charged 22A with 22BD (you need to time the D based on the range) that will put you close to the opponent for a throw or a 2A. You can also 22B~fast D or 22D to fake and bait reversals.

*At midscreen just use back dashes smartly to create space.

*623C has invincibility but punishable

*Rising j.A and other suitable anti-airs