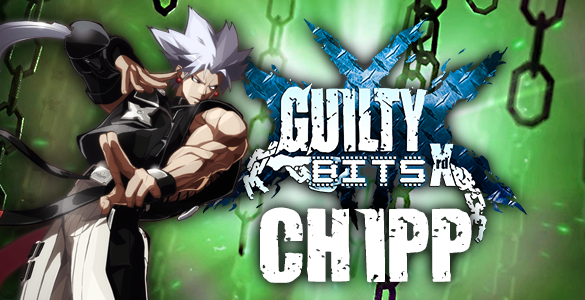 While Chipp takes a lot of damage because of his low defense, his mobility and fast normals allow to him choose how and when the engagement with the opponent will occur, and he has some scary corner mixups to boot.

2S – One of his main pokes. It has a good range, a good hitbox and hurtbox, is fast (7f), and staggers on counterhit. -1 on block. It has a really good recovery on whiff. Special cancellable but NOT jump cancellable.

f.S – Another good poke. As fast as 2S (7f), but a bit more range and recovery. -7 on block. Can beat jump attempt at midrange. Special and jump cancellable.

5K – Far less range than his S buttons, but is faster (5f) and overall has REALLY good priority against other pokes. Recovers very fast and has good active frames. -3 on block. Can be cancelled into specials and jumps, and can cancel into itself, even on whiff.

2D – The poke with the best range. It’s fast for its range (9f), hits low, and can knockdown.
Special cancellable.

6P – a good poke vs high hitting pokes, as it has invincibility above knees. Less range than his S normals. Careful of the recovery though. Special and jump cancellable.

j.H – Chipp’s main air-to-ground normal. Can hit twice and crosses up really easily. Has a good amount of active frames.

j.D – At the right positions, its great hitbox allows it to trade with or outright beat many common anti-airs. Use with caution as it is unsafe if instant blocked.

41236H(Gamma blade) – A somewhat high-risk high-reward projectile. Has good range but slow startup and recovery. Beats projectiles cleanly. +5 on block. On hit, it’s easy to close the distance and continue a combo, so it’s better to use at farther ranges. It CANNOT be cancelled from normals. You can YRC to nullify its recovery for safety on whiff and even approach if the opponent blocks it, but the slow startup and inability to use in chains limit its YRC usage.

236P (Alpha blade) – A risky special that can low profile under some attacks but is mostly used in combos, especially the aerial version done low to the ground via a tigerknee motion (2369P).

214K (Find me) – A nice little boost if you can find opportunities to activate it safely, as the invisibility makes it harder to react to Chipp’s movement and attacks.

22P/K/S/H(Teleport) – Last but not least. This is a key move for Chipp as it allows him to get in really quickly (K, S, H version) or to fake it and try to bait an action from your opponent (P version). 22K YRC is particularly good and can punish predictable attacks.

FDC (Faultless Defense Cancel) is an important tool for Chipp’s movement, and is done by canceling j.2K into faultless defense. It’s performed by inputting in the air 3k and adding another button very quickly. It alters your jump, so it is harder for your opponent to predict your movement, and for mixups midscreen.
How to do: https://youtu.be/YiPQ_p6E-Gw?t=189
Midcsreen mixup example: https://youtu.be/UA2WK5VhBK8?t=1

Chipp’s pressure options are very limited, even in the corner. He mostly relies on ending with his 236S (-1 on block) and in this situation challenge the opponent with his fast normals and mobility. To mix things up with the 236S he can sometimes end with teleports or jump cancel instant airdash instead.

c.S – Chipp’s main close range tool. +2 on block, so it can be used to frametrap or tick throw your opponent. You can link another c.S on hit if your opponent is crouching.

2P – Another good tool. +1 on block. It can also be used as a frametrap tool, and as a countermeasure against various defensive tools like Bursts and Dead Angle Attacks.

2K – A decent low. It can be cancelled into itself, so it is a good tool to prevent your opponent from jumping.

236S(Rekka) – Useful to “end” a blockstring, being -1 on block. Against opponent’s who are eager to attack back during “their turn” afterwards, you have the option to sometimes cancel it into the 2nd 236S (-7f on block), catch them with a counter hit and get a combo.

2D – The long ranged low can be used as a launcher in conjunction with 236S to do an air combo, and it’s key in Chipp’s corner mixup.

2H – your go-to normal when you are looking for a rewarding counter hit. You can cancel it to make it safe on block, and if it hits as a counter, it gives you a strong combo- Your best starter beside 6H, even if it trades.

6P – It can be good to prevent jumps but shines as a frametrap tool as you can greatly delay your cancels from, and create frame traps against mash happy opponents.

Jump Install – This is important for many of Chipp’s combos. When you reach a jump cancalable normal during ground combo, input a jump but immediately input next move afterwards so that the jump cancel does not occur. If done right, it allows you to keep your aerial actions later in the combo, after specials that leave you airborne.
Example combo: c.S->(8)->f.S->2H->22H->Air combos with double and triple jumps.

His midscreen oki is simple. Score a knockdown, and then try to mix him up with jump FDC (Explained at the start of the Neutral section of the guide). Hard to react but the damage output off of it is pretty low.

His corner oki is much deadlier though. Thanks to the wall cling (46 near the wall), he gains various options (left/right mixups, high/low mixups, command throw) with good damage that force the opponent into the mixup again.

You will need to practice and see what can be done against each character as some of them has specific moves that can counter specific options.

6P and 2H are his main anti-airs.
Air throw is also good especially if you ran before as Chipp momentum is great.

623S- A dragon punch that serves the need for an invincible reversal. It can shine when used wisely after instant blocking specific moves.

Faultless Defense is also important for Chipp, and his backdash can be useful in specific situations but it’s pretty slow to finish.